Angular and React compared. Who wins?

Both Angular and React have gained pretty much popularity in Frontend world. Yet sometimes it is pretty hard to tell what is the best choice for the project. Here is an easy instruction inside.

Before we begin, we would like to mention that if you asked yourself a question what is better for my project Angular or React, you are already on the way to success.
To make the comparison easier, we split into 4 factors to consider. So let the battle begin!

Let’s be honest, when it gets down to Frontend, performance is one of the major factors that need to be considered. Until the release of Angular 2, there was a significant difference in approaches taken.

Now when Angular developers have acknowledged how important and popular single-page applications have become. They released Angular 2 with some React philosophy introduced, which made our contestants pretty equal on performance and allowed continual content change even in huge applications.

Project size is the place, where things are starting getting chilly. If you have a small application or need to create an MVP really quickly, go for Angular.

It has really great MVC stack, which provides you with everything you need for kick off. But if you are planning a big project and know for sure that it is going to grow out of your mock up, we’d recommend choosing React.

There’s nothing wrong in using React for small applications as well, but since it doesn’t offer a lot of tools out of the box, the time you will spend for setting up would simply not be worth it.

Since it is important for application not only to be steady and user-friendly but also to be easy to find on the Internet, SEO should also be considered for a wide range of applications.

Angular is also not a dead case, but you will need to put significantly much effort here, like using PhantomJS or some other tricks. So React with server-side rendering looks much more compelling in optimizing your website for search engine.

And last, but not the least factor for a successful project is the development speed. It influences estimates and as a result final cost of the product.

The choice is not so easy here. The advantages of Angular is that it does magic for small projects since it is really easy to use for kick off due to a bunch of tools it provides.

React is more commonly used for big projects, so you might want to spend some time first, thinking what instruments you need to choose for your stack and try out some a couple variants. This takes time.

As a result, Angular is better in the beginning, but of you know it is going to be a long way developing an app, go for React and spend some time preparing.

Let’s sum it up in a small grid. 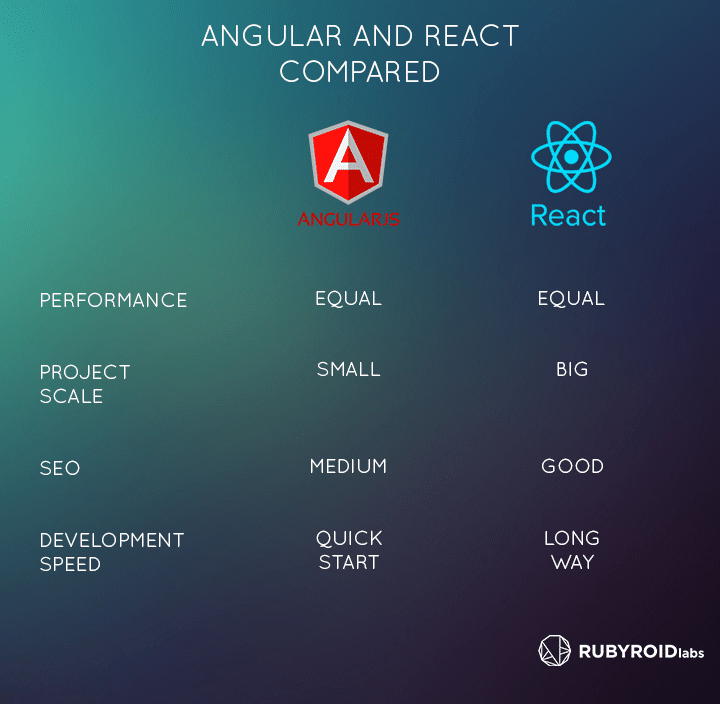 Hope this was useful! And what do you think about Angular and React? Leave your comments below.